I’ve seen it a lot,  and even more so lately; So many web sites that just collect dust, so many blogs that haven’t been updated in over a year, and even more links to web pages that no longer exist. It’s kind of depressing really, like an online cemetery where some one’s start-up was laid to rest. What’s even more heart-wrenching is that it doesn’t have to happen. Once set up and designed, a web site should should cost next to nothing to keep up and the return on investment should be well worth it. So what’s the problem? Well unfortunately there are several ways a web site can go wrong, some the client’s fault and some the designer’s fault.

The first way a web-page can fail is simply by not planning ahead of time what you want your web site to do for you. Web pages can be so much more that a static online billboard that people only remember until the next page loads. This having been said, you should sit down and figure out what you want your site to do for you. Too many people sell themselves and their site short. Let’s say you have a lemonade stand and you think, ‘all I really need is people to be able to get online and get my location.’ Sure that may be all you really NEED, but how can your web page make your interactions with your customers simpler and more mutually beneficial? Would something like a mailing list help you inform your customers of new deals and specials that get them coming back for more? How about if that mailing list automatically posted the specials to your new facebook/twitter page? Now we’re thinking. What about customer’s being able to leave reviews/suggestions so that you know what they like and don’t like and maybe even gauge demand. Once you start to think about it, your site is an employee that if trained properly, will work for you 24/7.

Everyone knows SEO is a big deal. Your web designer should know how to properly set up your site for search engines in his/her sleep. However what people don’t realize is the plethora of tools available to track their site’s performance. Google’s Analytics is a more well known tool, extremely useful in tracking what people are clicking but can also show you what ad campaigns are working and which one’s are not. Sites like twitter and facebook can be a grappling hook in your utility belt as well. Networking can not only grab you customers, but can link you up with other companies that may well prove to be very useful partnerships. People that under utilize these tools find it harder to adapt and are soon putting their poor site to pasture.

Oh, we’ll spend some time on this one. A lot of things can go wrong and a lot of mistakes can be made design-wise that can kill a site, for example :

Everyone likes free and everyone likes to be able to DIY, plus come on how hard can it be? Well, contrary to popular belief, it’s not easy. It’s nothing like Microsoft Word or Powerpoint. It’s a combination of years of learning design principles like contrast and visual hierarchy, mastering graphic programs, and for some of us learning multiple markup and scripting languages. Using templates, making your own logo, designing business cards in MS Word may be cost effective, however in the long run people may find that they bit off more than they can chew and the amount of money saved, was more than paid for in time and ongoing maintenance. I look at it this way; You could probably do it yourself;  just like you could probably fix your plumbing, set a broken bone, or do your taxes yourself too. However I don’t recommend it. I’ll stick with an accountant.

Outsourcing is another cost effective route to take when driving down web design lane. However the differences in native tongue, the quality of work, and the conflicting time zones might make this more complicated than sticking with your own economy. They may have the skills to get the job done however when people decide that they need more work done, they often find out that the company isn’t around to do it anymore and end up stuck having to pay someone else to de-scramble foreign code. Costing just as much or more in the end. Another trait outsourcing shares with the kid down the street and the large scale company is that they don’t care if you succeed or fail. They’ll take your money and move on.

The kid down the street. 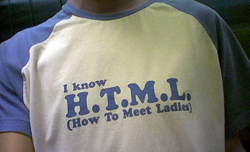 Not only does he or she not have a vested interest in your success but they wont know the first thing about business. Sure the site might look better than doing it yourself or even the offshore guys but they are not going to know what it takes to make your site work for your business. Also, as with outsourcing, people who find they need work done down the road find that the kid has moved on to something else… like the opposite sex, or college. Then there they are again, stuck having to pay someone else to backwards engineer an adolescent web site.

These can also be somewhat more cost effective, although not always. They also usually have set packages that you must fit into to, wont specialize to specific needs, and often the work behind the scenes is passed around to multiple people. They also act more like a middle man than a personal designer. Their customers often find that their site looks a lot like the design company’s other client’s sites. This is because they often design custom templates and simply change up a few things here and there from client to client. They might even contract local designers to do work for them, charging more than that designer might have in the first place. They also make it extremely difficult to add little customizations here and there as needed and the new team working on your site this time won’t know anything about your original needs. As with the previous two their portfolio is extensive enough with or without your business.

This can go sour two ways but either way, things start off so good; the client and the designer meet, they discuss their plans for the new born baby site, they both come up with tons of new ideas on how the site can grow, they laugh, they dance, they fall in love… ok maybe things didnt start out quite that way but next thing both parties know is that theyre stuck in a messy custody battle over a site neither of them want anymore. Hopefully this hasn’t happened to you. What happened here is a clash in ideas. Clients often find they want things on their business’ site that can damage the site. Flash intro pages, animated images, background music, may seem nice to some but all serve to hurt web sites visually both to the users eyes and to search engines. Clients may lose site of the fact that they hired a designer to do his or her job… design. The designer has many ‘rules’ they must follow while designing a web site. They must remember design principles, coding issues, and accessibility issues all while  playing the role of the United Nations in various technology wars: how the site is going to look on different browsers, different operating systems, different screen sizes, different internet speeds, etc.  I picture this like standing over a mechanic, telling him you don’t want him using that wrench or that you’d prefer if the bolts he used match the paint job. The end result would be a car that doesn’t run.

Designers are not innocent either. Some designer’s become so preoccupied with making every site the pinnacle of design that other important factors like SEO and accessibility are left out. These designers may be so concerned with the way their portfolio looks that an all out war is on if the client even makes a suggestion. Both parties must respect each others ideas or regardless of whose fault it is, the end product is a web site funeral.

This is more important than most people think. A lot of people, when launching their web site, run out and set up a facebook, a twitter, a wordpress, a tumblr, a blogger, and even a myspace for good measure. This is fine and dandy until time comes to update them which often never happens. These social networking tools can have a huge impact, but merely possessing an account won’t do anyone any good if they don’t get regularly utilized. You might think ‘pft! How could I ever have time to utilize all those social platforms?’ Well your designer/developer can help integrating APIs into your site which will make your workload much lighter, however the honest answer is; you can’t. People may often go all out registering for every site they know later resulting in a cult suicide or web site and disciples. Pick a few, I usually suggest twitter, wordpress, and facebook although it can vary from site to site. Once you pick them, stick to it, interact with your fans/followers/bloggers/whatever. It can not only make a difference but you might end up even having fun doing it.

Honestly I’d say to avoid these death traps is pretty easy. Make your website work for you by using free online tools and interacting with your customers and the site will pay for itself in the long run. Also, pick a good, personal designer, and stick with them. A good designer might be cost more but your ROI will be that much greater. Sure I may be biased but think about it, a really good designer will not only have an interest in keeping you up around because of the money, experience, and potential word of mouth, but you may even form a friendship, be able to make each other look good, and gain a personal touch you won’t get anywhere else. And let’s face it, if for no other reason; they want you around because no designer wants a bunch of dead businesses in their portfolio. However work together and you might even find your designer acts as an online business and marketing consultant providing even more return on your investment.